A new roulette game has been released by Phoenix Game Studio in the Google Play Store. It is called ‘Jackpot Roulette Casino’. The good news is that you can download the app and play the game free-of-charge. It has some exciting graphics and thrilling sound effects. 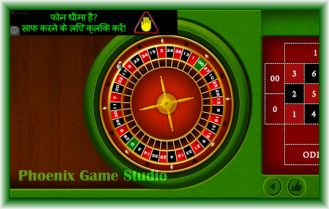 The players of the game get typical European roulette with the option to place different kinds of bets in a quick and easy way, including few of the slightly complicated combinations. In addition to this, more chips can be received by the players without any extra payment. What is extremely impressive about the game is its animation featuring the ‘roulette wheel’. It is amazing to see the spinning and rolling of the ball on the wheel.

In the previous few weeks, there have been over a thousand downloads of the game and it has been getting excellent reviews from the players. More than 97 percent of the feedback left on Google Play rewards it 4 to 5 stars. This indicates that it has been received quite well among the users and they are enjoying the game thoroughly.

Roulette is basically a casino game, which got its name from a French diminutive. The players can opt to put bets on a combination of numbers or a single number, colours black or red, or the appearance of an even or odd number.

Phoenix Game Studio is a game development firm, which operates independently and is based in Serbia. It is a small team which is driven by a common passion for creating as well as distributing exciting and attention-grabbing games in addition to programming, drawing, 3D modelling and digital sculpting.

It is presently working on XBOX consoles at the XNA Game Studio as well as Unity 3D, currently for iOS. It is however planning to extend to PC, Windows Phone 7 and Android.